Buying a new lamp can be confusing when you have to wade through the marketing campaigns and creative wording.  These are all terms used to describe the type of bulb used in the lamp for your projectors.

This wording could lead you believe these are the same as the manufacturers and in some cases they are.  In other cases they are not.

My goal by the end of this post is to help you understand what you are buying and to make sure you get the best value for your money.

Let’s use a BenQ SP840 projector as an example.   BenQ supplies a lamp inside

with a specific bulb.  That bulb is from one of the Six OEM Bulb manufactures in the world. Those manufacturers are Philips, Ushio, Phoenix, Osram, Iwasaki-Eye and Matsushita. No other company makes an original projector lamp. Any other brand of bulb is a compatible. Not worth dwelling on compatibles…

Lets take a step back and look at the beginning of the 5J.J2N05.001 lamp to fully understand the situation. 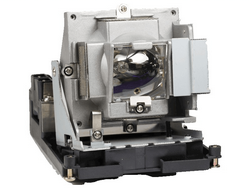 Most manufactures do not make their own Lamp housings.  They contract to another company who has the factory and molding equipment. That factory may make lamps for multiple companies.  In this case the lamp is molded by an Original Equipment Manufacturer (OEM) and then labeled as a BenQ part. When the company is designing the lamp with BenQ, they decide on a bulb manufacturer that fits the parameters of the performance they want to get out of the new lamp and projector.

In this case the bulb manufacturer used was Philips.

Philips was the first manufacturer to patent Short Arc Mercury Vapor lamps back in the late 70s.  The original use was for Printer Circuit board manufacturing. Since the market for PCBs is much smaller than projectors, they found the technology was better suited than the original bulbs which used metal halide technology.

Once BenQ and their OEM decided on the Philips UHP bulb, they then design the housing to properly support and align the bulb. Upon completion of the design the OEM manufacturers all the new lamps that BenQ then ships in their SP840.

The OEM also makes quite a few extra and has them boxed in BenQ boxes with the BenQ label.  That way , when a lamp fails under warranty, BenQ replaces it with a BenQ OEM Lamp.  That is what you should get if you see a listing for OEM lamps. It should be in the manufacturers box with the manufacturers label.

These same companies make a lot of the aftermarket versions of the same lamps.

This brings us to the aftermarket lamps. Some vendors list OEM Bulb or 100% Original Bulb when that is not necessarily the case. Some companies will substitute a bulb that is made by one of the main 6 companies in the aftermarket and while its still technically an Original bulb, its not a suitable replacement for any number of reasons.

If your BenQ SP840 needs a new lamp and you look around you will see people selling them with Osram bulbs inside. It is true that Osram makes a bulb of similar specs and the same size but it is not the same. The focal point of the arc tube is in a different place.  While the bulb will light, and display an image the image may not be as bright as the Philips version. It also may cause stray light leakage.  This isn’t Osram’s fault.  They designed the bulb to run properly in another lamp where the Philips may have a focal point miss-match.  The simple reason for this is cost.  It makes it look like you are getting the same-as-the-original when in reality you are not.

The BenQ scenario I explained above is far from exclusive to BenQ. In fact every manufacturer except Panasonic have their lamps made that way.  They all use multiple bulb brands (never in the same model).  Next Ill explain what I mean about Panasonic.

Up until recently(past 5 years or so) that leaves the consumers only able to buy OEM replacements or Compatible replacements.  Nothing in between.

Fortunately a few years ago Ushio and Phoenix decided it was time to make a replacement that was custom designed to work in place of the Matsushita bulbs. Rather than take an existing bulb and cram it into a reflector, they actually designed the gas mix, the arc tube and refectory to properly recreate the same specs that the Matsushita bulb had. They did it in such a way that did not violate any patents. This gave us a very reasonably priced option for an out-of-warranty projector to use for replacement lamps.

While this was successful, sometimes the vendors who sell these take advantage of the situation and will try and cram a Phoenix into an Epson lamp because the Phoenix bulb is $20 less than the Osram that would work better. They take the stance that, “it fits so it ships” when in reality,  that is doing us a huge disservice.

There are many other aspects to substituting a lamp. When Ushio made their Matsushita replacement, they made sure the heat generated would be dealt with the same as the original. Sellers who do not know what they are doing substitute bulbs they are not checking for things such as cooling or airflow.  They don’t check the focal points of the light or the startup voltage required. Sometimes they will even use a 200W bulb in place of a 150W bulb.  It’ll light, but it’s going to fail early.

Another issue is Counterfeits. I have personally seen counterfeit Ushio bulbs being sold as original by other less than upstanding companies.  Fortunately the amount of counterfeits in the USA are quite low and I don’t see a reason to waste your time ranting about the obvious.

Pureland Supply only sells Original Bulbs in our lamps. We work very hard at sourcing the lamp with an Original bulb that was used by the OEM company who made that lamp for BenQ(for instance). We don’t stop there though.  We will go as far as purchasing a SP840 and running that lamp for 2000 hours and checking the brightness, CRI, and temperature while operating.  We will go back to our supplier and have them update designs if they are not up to par. We will even go as far as manufacturing our own parts if it means the lamps will be as close to your original as possible.

As an example, we tested 3 different bulbs for the Panasonic ET-LAD60 projector lamp.  We tested Ushio, Phoenix and Osram in their housing inside a projector.

Total testing took 3 weeks to run all of them.  At the end the data showed the Ushio and Phoenix to be as bright(in some cases brighter) than the Matsushita OEM that was used as a control.

Average Lumen output was 3500 for the Matsushita, 3700 Lumen for the Ushio and an average of 3550 for the Phoenix.  After verifying the timer modules were correctly programmed we were able to sell them with confidence.

Where does this leave you the consumer?  Hopefully with a little more insight into where your lamps come from and how to know what is what.

To help further, here are 5 tips to keep in mind while shopping around for your lamp.

Hopefully this enlightened your knowledge on why not all Original inside lamps are the same.

I also expect you know how committed Pureland Supply is to carrying a good product. We would much rather sell you a lamp that will perform well for a long time so that you will come back than go for a cheap sale.

You do get what you pay for and if the OEM’s trust the bulbs they use, so do we.